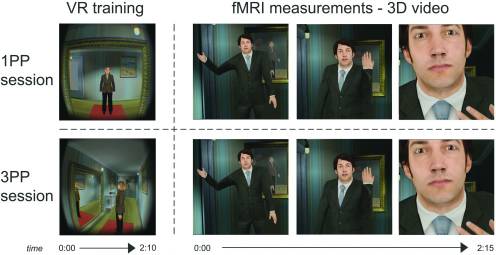 Social aggression, such as domestic violence, has been associated with a reduced ability to take on others’ perspectives. In this naturalistic imaging study, we investigated whether training human participants to take on a first-person embodied perspective during the experience of domestic violence enhances the identification with the victim and elicits brain activity associated with the monitoring of the body and surrounding space and the experience of threat. We combined fMRI measurements with preceding virtual reality exposure from either first-person perspective (1PP) or third-person perspective (3PP) to manipulate whether the domestic abuse stimulus was perceived as directed to oneself or another. We found that 1PP exposure increased body ownership and identification with the virtual victim. Furthermore, when the stimulus was perceived as directed toward oneself, the brain network that encodes the bodily self and its surrounding space was more strongly synchronized across participants and connectivity increased from premotor cortex (PM) and intraparietal sulcus towards superior parietal lobe. Additionally, when the stimulus came near the body, brain activity in the amygdala (AMG) strongly synchronized across participants. Exposure to 3PP reduced synchronization of brain activity in the personal space network, increased modulation of visual areas and strengthened functional connectivity between PM, supramarginal gyrus and primary visual cortex. In conclusion, our results suggest that 1PP embodiment training enhances experience from the viewpoint of the virtual victim, which is accompanied by synchronization in the fronto-parietal network to predict actions toward the body and in the AMG to signal the proximity of the stimulus.