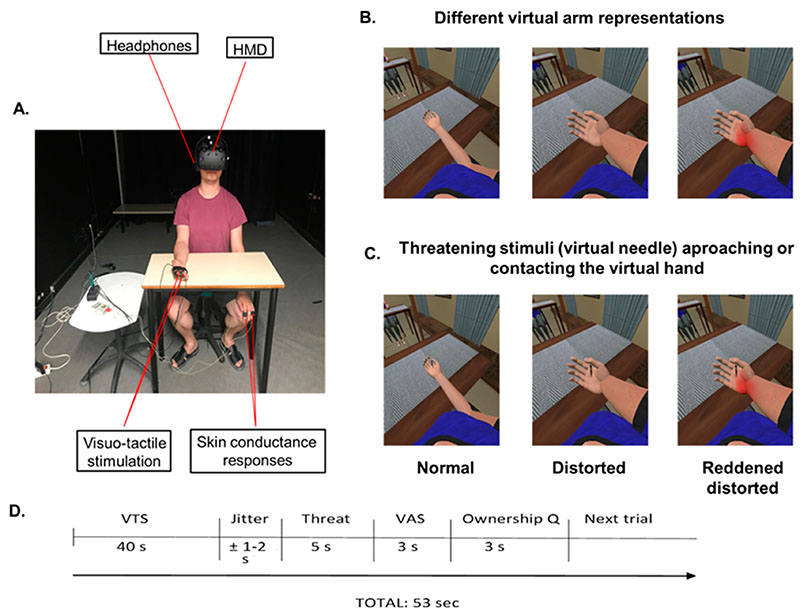 Changes in body representation may affect pain perception. The effect of a distorted body image, such as the telescoping effect in amputee patients, on pain perception, is unclear. This study aimed to investigate whether distorting an embodied virtual arm in virtual reality (simulating the telescoping effect in amputees) modulated pain perception and anticipatory responses to pain in healthy participants. Twenty-seven right-handed participants were immersed in virtual reality and the virtual arm was shown with three different levels of distortion with a virtual threatening stimulus either approaching or contacting the virtual hand. We evaluated pain/discomfort ratings, ownership, and skin conductance responses (SCRs) after each condition. Viewing a distorted virtual arm enhances the SCR to a threatening event with respect to viewing a normal control arm, but when viewing a reddened-distorted virtual arm, SCR was comparatively reduced in response to the threat. There was a positive relationship between the level of ownership over the distorted and reddened-distorted virtual arms with the level of pain/discomfort, but not in the normal control arm. Contact with the threatening stimulus significantly enhances SCR and pain/discomfort, while reduced SCR and pain/discomfort were seen in the simulated-contact condition. These results provide further evidence of a bi-directional link between body image and pain perception.